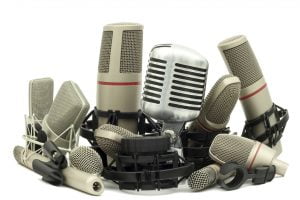 There are a lot of factors that come into play when considering what genre (or genres) you’re going to pursue on your voice over journey.  One of the first questions to ask yourself is:  What makes me stand out?  Sometimes, an accent or vocal trait does the trick – like a melodic Irish accent, or a deep baritone voice.  Maybe long-form narration comes easy to you.  Perhaps you’re fluent in multiple languages.  There are any number of traits, talents and abilities that might separate you from the pack.  Knowing your strengths and playing to them is what finding your voice in voice over is all about.

Make no mistake:  there’s a lot of competition in voice over – and it’s not just local, not just national –  you will be competing with voice actors across the entire planet! – so it’s best to have something that sets you apart.  It’s also crucial to know what to do with it.

Let’s say for a moment that Charles is a budding voice actor.  He’s really good at character voices, impersonations, and he also has a knack for performing a host of accents and dialects.  To do all this, Charles has to alter his voice in one way or another, which is a skill not all voice actors possess.  This of course, sets Charles apart.  If he’s really good at it, this could be his ticket.

If this happens to be your wheelhouse too, the next thing to identify is what voice over genre plays to these strengths?  In Charles’ scenario, being versatile with his voice could put him on a path to narrating audiobooks.  He might also consider pursuing roles as characters in video games or animation.  Of course, each path has its own unique challenges, so it’s best to learn as much as possible as you find your voice in voice over.

Hire a voice over coach.

A good, reputable voice over coach working with you one-on-one is not cheap.  It’s also one of the most important career investments you can make.  Keep in mind that most seasoned voice actors continue to work with coaches throughout their careers – to stay sharp and be the best they can be – so the sooner you embrace the idea of coaching, the better.

A good voice over coach will give you direction right out of the gate.  Of course, giving feedback on your reads is job  one, but they’ll also be able to gauge your strengths, and guide you toward genres that play to those strengths.  As you start out, having someone in your corner who’s been there, done that in the world of voice over, and has your best interests at heart, can really be a difference-maker in finding your voice in voice over.  If you think you know what avenue of voice over you want to pursue, that’s great…but have a professional confirm it, because in the world of voice over, there is no substitute for a good ear, or for good advice.

Okay, so you’ve confirmed what it is that sets you apart.  In finding your voice, you now know what genre(s) of voice over you want to pursue.  When the time is right, you’ll need to do some research and identify who the buyers are.  For some voice over genres, you’ll go directly to the buyer.  For others, it’s best to have a voice over agent who has the connections to land auditions for you.  There are also times when you’ll be contacting content creators, such as video producers and eLearning developers.  The list is vast and varied.

Researching online is all part of the discovery process…and just one of the skills in which you’ll need to be proficient.  After all, this is a business…so you have to approach it like one.  The actual speaking into a microphone part is the icing on the cake.  The fun part.  GETTING the job is a whole nuther matter.