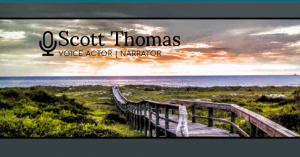 We’ve all seen them.  We’ve heard them, too.  The local radio, cable or tv commercial that would make a corpse cringe.  Bad audio, poorly written, horribly read.  Sometimes, they’re so bad, they are memorable – but for the wrong reasons!  That’s why I’d like to discuss the importance of a professional narrator for your project.

There’s a reason you hire the pros, especially when it reflects on your business.  You don’t want to seem like you’re cutting corners and sacrificing quality, right?  Hiring a professional narrator is no exception.

Voice Over is Not as Easy as You Think.

I can’t tell you how many times I’ve had well-read, successful individuals (who are NOT voice artists) in my studio to record a script.  Every now and then, I’d find someone who was a natural…but more times than not, they tended to sound like robots.  Reading.  From.  A.  Script.

It’s not as easy as it may seem.  Truly.  Now, if you have something like an acting background or experience in public speaking, that might give you a nice head start.  However, speaking on stage as opposed to speaking into a studio mic, for instance – those are two different animals altogether.  To be successful in the world of voice over, it takes practice, coaching, proper technique, professional-grade equipment, more coaching, more practice and lots of experience pulling it all together.  That doesn’t even touch on the technical requirements of a professional-sounding recording.

Like most professions, there are a lot of rungs on the voice over ladder.  Someone just starting out in a small town home studio is not going to command the same rates as the twenty year VO rock star who works in downtown Los Angeles.  The comparison of the finished work is also likely to be quite different.

The project you’re working on deserves to have a professional touch.  If any facet lacks in quality, the entire finished product is at risk of coming across as amateurish.

You Get What You Pay For.

It’s true.  And like most things in life, if you skimp and cut corners on something, someone is going to notice.  So, Uncle Carl recording on his tape recorder at the kitchen table probably isn’t your best option.

Every now and then, you find a good bargain, though.  I’d like to think that this is one of them.  Business narration, explainer videos, commercials, audiobooks.  You get a 20+ year VO veteran, at a small market price.

Check out my demos, ScottThomasVoiceovers.com/demos/ and if you like what you hear, shoot me a text or an email and let’s talk.